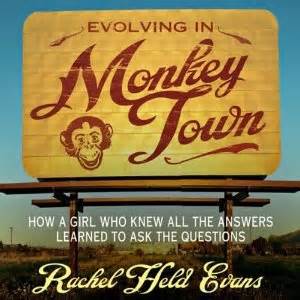 Some might find it a bit odd that I’m promoting the book and blog of a devoted Evangelical Christian. Her name is Rachel Held Evans and yes I not only follow her blog, I loved her book: Evolving in monkey town: How a girl who knew all the answers learned to ask all the questions. Despite living in the Bible belt and being raised within the Christian cocoon, daughter of a preacher, graduate of a Bible college, trained in apologetics, schooled in denying evolution, taught that gays and heathens like me will burn in hell, she came to accept evolution with “a sneaking suspicion the scientists might be right” and that gays and non-Christians don’t deserve eternal fire. She believes firmly in the Christian faith and that it must itself evolve, i.e., change in light of new information. The young and even many middle aged folks in the US are seriously questioning or leaving Evangelical Christianity in droves. Why now? I think Rachel explained a key reason far better than I could: “No previous generation enjoyed such easy access to information or experienced such a profound sense of connectedness to the rest of the world.” Getting to know unbelievers and gay folks personally contributes as well. We do live in unprecedented times of instant information exchange, access to higher education and daily dialogue through social media, email, internet video, even TV and print news sources. The discussion of religion is constant and everywhere. Traditional religious ideas that promote division, repression, even hatred around the world are being questioned and jettisoned due to the spread of information and connection with our fellow humans all over the globe.
So from inside Evangelical Christianity, secular activists now have unlikely allies. Based in reason and compassion, humanistic values that transcend all religions, folks like Rachel are changing it from within. Folks like me would like to push religion off the cliff as soon as possible, but being realists we will gladly take all the help we can get to diminish its grip. We are immensely glad she and others are evolving in their faith toward the normal human empathy and reason we all share, which is all too often pushed aside by the religious need of telling everyone else how they must live to satisfy some deity. The history of Christianity is predominantly the elimination of belief in one Bible verse after another as new knowledge and compassion for others makes supposedly inspired verses seem as cruel, primitive and man-made as they are. Like all religious folks I’ve ever met Rachel is a smart person who can change her views in light of new information; sounds kinda scientific to me, and rational, and enlightened, even secular. So I highly recommend reading her book. If me and the other unbelieving scum in the New Enlightenment secular movement can’t convince you to ignore even more of the Bible and lighten up on your fellow man maybe she can.

Many Xians feel that since they change their beliefs by re-interpreting scripture due to new info from modern science, this should convince us there is no conflict between science and religion. Far from it, in fact it proves the point of the inevitable and recurring clash. For but one early example, in the 1850’s few educated people if any doubted the special, completely independent creation of all species by the Xian god as told in Genesis. Without Darwin’s evolution by natural selection, biogeography, then genetics, now modern comparative genomics and a detailed and voluminous fossil and geologic record documented in every corner of the globe and further the dozens of dating methods that document the age of the earth, historical human artifacts and fossils, without all of these the Genesis account or other religious creation myths might still seem plausible and remain unchallenged. But all this new information, garnered by science in the last 150 years not only makes the religious accounts seem as primitive as they are, it provides an explanatory network so vast and comprehensive as to unquestionably validate Theodosius Dobzhansky’s famous understatement “Nothing makes sense in biology except in light of evolution.”

All this science negates the utterly wrong religious explanation of life on earth. If none of it had been discovered, the religious story would yet be accepted, unchallenged (as it still is by diehard Creationists). As new information comes in, old ideas especially primitive ones like fantastic and mythic religious explanations are discarded. This is conflict and incompatibility. No amount of denial can change that. Information kills religion. End of story.

So check out her blog and get an understanding of the humanistic information driven reformation going on within Xianity, even evangelical Xianity itself.