I featured one of Jaclyn Glenn‘s hilarious and biting videos some time ago. Check out one of her new ones “Our God is an Awesome God.”

The whole thing is XCLNT, but check out the ridiculous irony of the first hymn she parodies “You will know us Christians by our love”… then check out what kind of love serious Xians have in store for you if you’re gay and in some African countries.

The Evangelicals numbers are dropping here in America, so they are making a concerted effort and being disgustingly successful with it, in converting African nations to the meaning of real Xian love.
As disheartening as their hateful campaign in Africa is, simultaneously the world over, secularism is on the rise. When I get discouraged seeing the horrors of the Conservative Xiansanity backlash in parts of the world, I’m reminded that a few short years ago it wasn’t a backlash but real growth in Xiansanity that was the main problem… and that it largely went unchallenged.

We are fast approaching the 10th anniversary of the publication of Sam Harris’s End of Faith this March and I have to remind myself of the incredible progress secularism has had worldwide and especially here in America. The billboard below says it all.
We’ve all seen plenty of “There’s Probably No God, So Stop Worrying” bus signs and billboards the last few years, they certainly didn’t exist 10 years ago or anytime before, that’s for certain!
AND now this new slogan/ campaign from the good folks up dere in Minnesota, eh?
Well it just says it all: 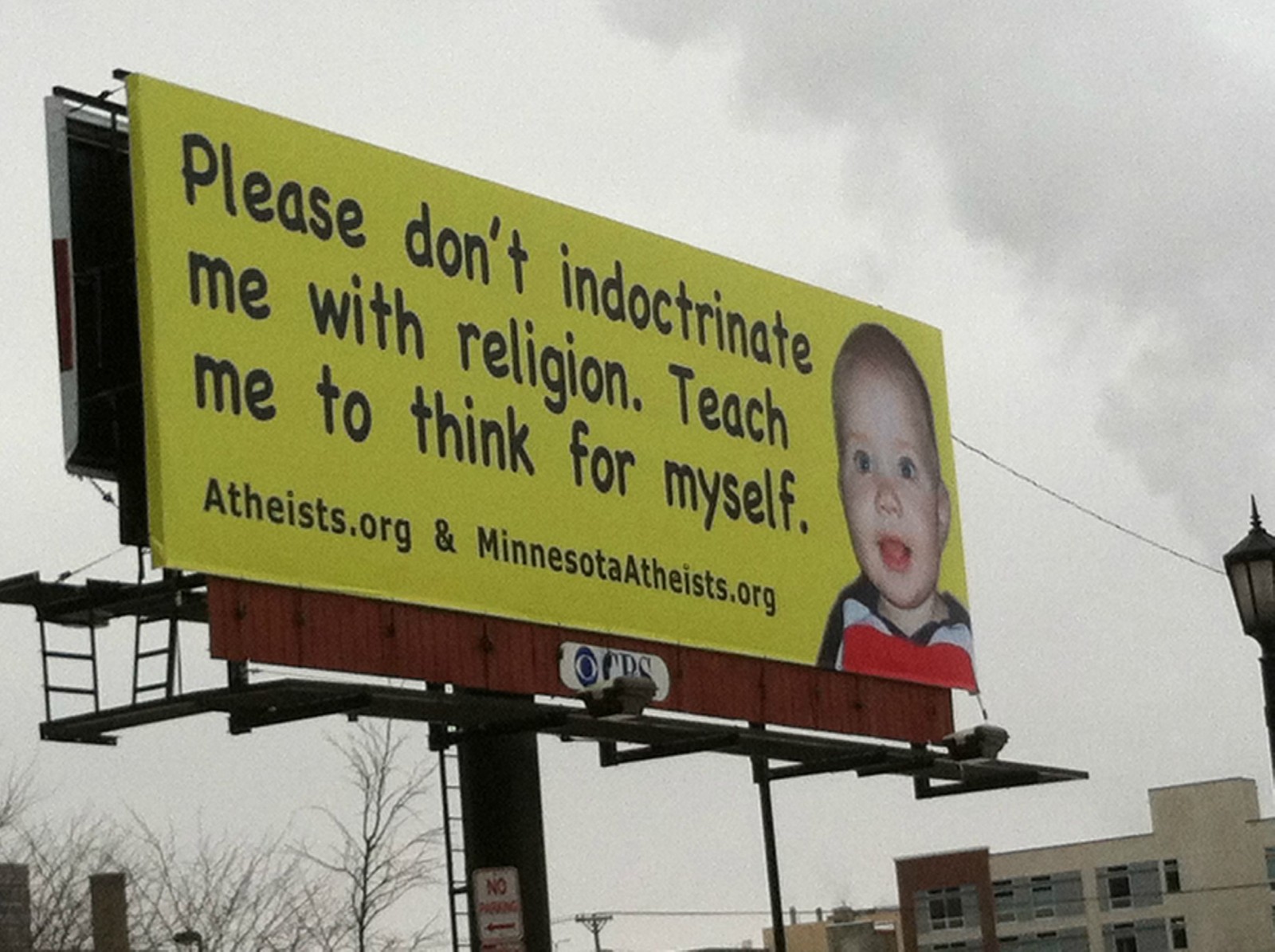 Going right to the root of the problem: religious child indoctrination. Hell, yeah.

Somebody once said:
“Religions would collapse under the weight of their own absurdity if not for child indoctrination.”

‘Nuff said! I thought it was the British philosopher A.C. Grayling but I can’t find a reference to it, if anyone does know, please set me straight. It is truly one of my favorite quotes, but I can’t seem to verify it.
Be that as it may that billboard really brought my spirits back up (so to speak). ANY atheist billboards didn’t exist before 5-6 years ago, and I don’t know if there have been too many (if any) going right after the disgusting practice of child indoctrination before this one.
Changing Cultural Inertia™ requires a lot of constant consciousness-raising over decades. Look at the success of the gay marriage fight. It has taken years, but they are winning. Twenty states approving it is 31 too few, but consider there were none for decades and only recently after years of campaigning is the tide turning as rapidly as it is. We can put a dent in child indoctrination as an unquestioned cultural norm as well.

It was only 6 years ago that Richard Dawkins really brought this perspective to light in his landmark God Delusion. I remember reading him calling religious indoctrination a form of child abuse and thinking, “Wow, he is really hardcore, maybe he’s gone too far with that one.” It didn’t take very long to realize I reacted that way initially because teaching young children their one and only religion was such a longstanding cultural norm, that of course it was normal and respectable. It was difficult to hear then, but now it is so mainstream in secular thinking that somebody has put it on billboard.
Now, that’s progress!!!
So Sam’s kickoff of the New Enlightenment is nearly 10 years old, Dawkins’ God Delusion only 7, and Folks like Jaclyn Glenn have been punching back at religion only the last few years… and now we have secular organizations openly calling for the end of child indoctrination!!
We can break the Cultural Inertia™ that says we should allow, even respect religion’s brainwashing of cognitively and emotionally defenseless children as a normal even holy practice of culture. We can expose it for the sleazy custom that it is. We can change the culture.
We can win.
Information Kills Religion.™