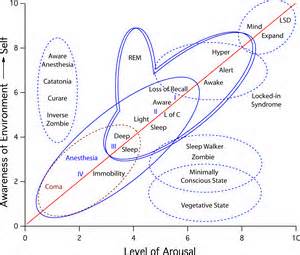 An Empirical Analysis of Consciousness

Two excellent videos will bring us up to speed on some of the incredible empirical work being done on consciousness in humans.
A few philosophers, Thomas Nagel, Colin McGinn and David Chalmers among the most prominent, maintain for various reasons that consciousness is an intractable problem, that will not, can not be solved by empirical investigation.
Bullshit. We’re working on it.
I’ve discussed a bit of Chalmers’ pronouncements in a previous post and will be coming back to the subject as it warrants a lot of review and there is a lot to talk about…from the investigations by neuro-scientists like the two I feature here today:

From the standpoint of neurophysiology:
1. Baroness Susan Greenfield:

In an hour and a half talk from a bit over a year ago she provides a rather unique and physiological, neuronal perspective on consciousness drawing from empirical studies on anesthesia, neuronal imaging and manipulation. She throws a dig or two at philosophers along the way…my kinda lady.

From the standpoint of neuropsychology:
2. The incomparable V.S. Ramachandran:

Both demonstrate the unpacking of the mystifying term “consciousness“… that it can be done. As the Baroness points out, a sudden threshold of consciousness is difficult to discern, altho we would not grant consciousness to just any living thing, it needs a nervous system and some sort of representation, maybe self –representation, maybe a full blown self-concept (the view I lean toward) as is only found in humans.
Then there is the idea of sentience, feelings, feeling pain or seeing red for example that the philosophers have termed qualia: subjective sensations and perceptions that we cannot share between us and who’s experience is said to be unfathomable by our philosopher friends because we can never in principle explain how matter in the form of neurons can somehow make the perceptual experience of red or the feeling of pain. Therefore, say these theologians, er, philosophers (sorry, I get those two mixed up) studying consciousness empirically will never solve the problem, because consciousness is somehow a denizen of the spiritual realm, a quantum phenomenon or an inherent property of all matter…whatever the fuck any of those ideas really mean.

Be that as it may folks like Rama and Greenfield and others are plodding along oblivious to the pronouncements of the philosophers. You will note they both make jabs at the philosophers who rather smugly maintain not only intractability but that the domain of consciousness properly resides in the hands of the “professionals” trained to expound on the subject: philosophers and theologians.
It gets interesting.

Both videos in their entirety are fascinating and groundbreaking and begin chipping away at what consciousness is, unpacking the mystery of this loaded term (to which I will be devoting a whole post or two in the near future) but one particular section of Ramachandran’s talk really stands out.

At 59:20, just after he discusses the use of the mirror box for dealing with phantom pain (qualia is intractable, can’t be studied or manipulated or even altered you say?) he talks of manipulating one’s perceptual experience of sensation as located in one’s limbs by altering the visual feedback of a normal student volunteer.
By manipulating their visual perception of touch on one hand that is out of sight he can in a matter of minutes alter their perception: their conscious experience of where they feel that touch, moving it in their body map representation from the out of sight hand being touched to a fake rubber hand that is visible or to a tabletop in their visual field. It is astounding.
Rama is careful to point out this is new work, not yet replicated outside his lab (in the manner of good cautious science, unlike philosophers whose pronouncements are solitary and the sole result of one’s being enamored of one’s own ideas).
This is important for two reasons. It shows that feeling, the philosophers qualia is not an all or nothing phenomenon, but one of components, one of which, the phenomenal experience of location is malleable. We can alter qualia! It’s a hell of a start.
Secondly, it shows the conceptual component of perceptual qualia. I suspect we may only be able to manipulate the phenomenal location of qualia only in a human subject who has a sufficient conceptual self and conceptual knowledge of the world that includes knowing what a limb, hand or table is and what their self with all its autobiographical memories is within an environment…All of which no animal, not even our closest cousins, the chimps nor our partners in advanced social cognition, domestics dogs show any evidence of possessing.

Do watch this segment of Rama’s if you watch nothing else of these two videos; it is astounding.
While the philosophers are busy pronouncing in principle intractabilities and the theologians are squirming over the demystifying of their precious soul, and both groups are squirming in their seats uncomfortable with empirical neuroscience trampling all over their turf, folks like Ramachandran, Greenfield and many others are advancing our knowledge.
Dig it.