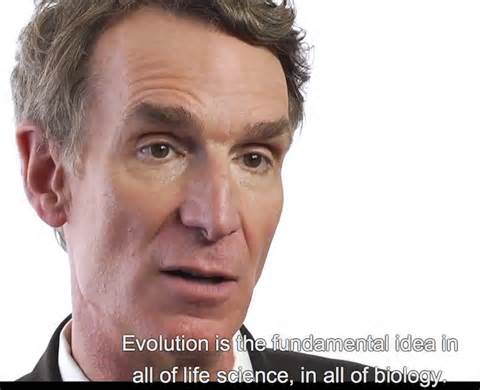 It is hard to believe over 3 months have passed since the great “Creation Debate/Discussion” between Bill Nye and Ken Ham which took place at Ham’s Creation “Museum” Feb 4th in northeastern Kentucky.
About a month ago, I read Bill Nye’s article from Skeptical Inquirer posted on Richard Dawkins’ website which you can read in its entirety here.
Its Bill’s take on the lead-up to, preparation, and aftermath of the debate which many in the secular community vociferously admonished Bill Nye not to partake in.
I really urge you to read Bill’s recap and commentary. I think you will come away with an impression similar to mine of what a class act Bill Nye really is.
And “act” is not a derogatory term in this case at all and rather appropriate for a whole other reason which struck me when I saw Bill speak at Murray State University in Western KY the night before the “Big Debate.”
I’ve blogged on Bill before (check it out here and here.)

Bill is a scientist, but more important to the debate, he is a high profile TV personality, an experienced actor and writer in that venue, used to explaining science in front of the camera in various productions for over 20 years, including his very successful “Bill Nye the Science Guy” program which ran from 1993-1998. Bill is up front in his article that he is not an evolutionary scientist, his field is mechanical engineering and he has some background in astronomy as well, but doesn’t pretend to be an evolutionary biologist or paleontologist. He did his homework for the debate with secular folks who have experience with Creationism and their “debate tactics.”

As a presenter, TV personality, and science educator, Bill knew his audience and he knows that stage. This quote from the article is but one reason why maybe Bill was the right guy for a televised debate:
“On the slides in my “decks,” as they’re called, I do not use many words. My colleagues sent me dozens of PowerPoint slides for my use. Thank you of course, but my goodness you all, when I watch many of your presentations, it’s like reading a page of book projected on a wall. How can someone in the audience focus on what you’re saying, when there’s a blizzard of words in front of her or him?”

When I saw Bill in front of a couple of thousand rabid fans at MSU that Monday night before the debate the next evening, I’d only seen pictures of him in the media or heard of him from a bazillion of my students who were in love with this guy. Having never seen his show and only recently caught a few impromptu interviews on TV just before the debate which left me wondering if his detractors might be right, my impression of his delivery and his knowledge that night was “this guy is in his element and knows what he is doing.”

Another quote from Bill’s article:
“I’ve got to mention another thing to you all. To a man and woman, all of my advisors, NCSE staff, and skeptics alike, strongly felt that the desirable position in a situation like this is to go first. This, many of you believe, puts the onus on the other guy or gal to refute your points. I just don’t see it that way. This may be from experience in television, or it may be my misguided overconfidence; I wanted to go second in the confrontation.”

Whether Bill won the debate or not is moot. In his article he certainly could have taken many of his detractors to task. He didn’t…and his approach was from the perspective of an educator, an entertainer if you will. The best teachers we all remember made an impression on us precisely because of their personality and their passion.
Bill again:
“Something else I’d like to point out: From the beginning, I told Genie et al., that at some level, this thing has to be fun. Otherwise, it’s hard to be passionate and have the audience like you. Put another way, what is it that you or each of us loved about your favorite teacher or professor? I believe it’s his or her passion. It was Mr. Lang, my teacher who loved physics, who got me excited about airplanes, mechanisms, and electronics. To that end, I included a bit from astronomy. I talked about the big bang and why we, in the rest of the world, believe in it and are filled with joy by it. I figured that Mr. Ham would be at best apologetic, and at worst, just plain bewildered by it. I leave any conclusion about his reaction up to you.”

I’ve mentioned a gozillion times on this site: “Information Kills Religion.” Bill Nye doesn’t come out and take that tack, he avoids that confrontation directly as it is part of his approach, and we need all the approaches and approachers we can get in the fight against the utter delusion of Creationism. Thanks once again to Bill for taking it on, on his terms.
So he’s gotta have the last word:
“No matter where this leads, thanks to all of you, who’ve helped me over the years and in recent weeks to think critically and speak clearly about science and reason. It’s in the national interest to enlighten young people. The longest journey starts with but a single step. In this debate, we’ve already traveled a long way, but with projects like the Ark Park still in play, there is quite a journey yet ahead. If we keep making our arguments clear, and continue to vote and fight the political fights, together we can change the world.” 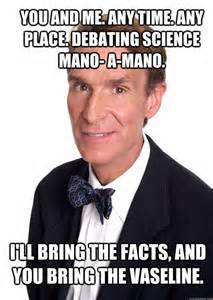