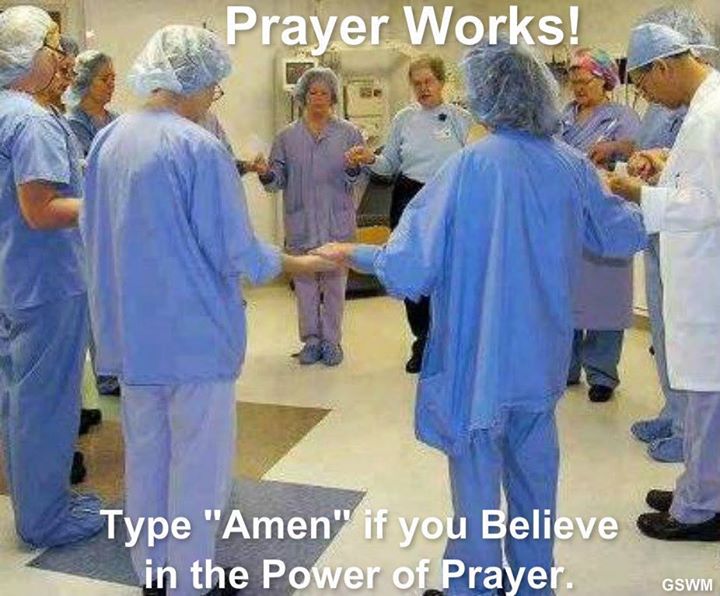 I guess I can’t let this one go. This post started as a Facebook comment and it was so pertinent I felt compelled to expand upon it.
Consider that whatever medical procedure the medical team pictured above were about to perform worked because of medical skill and knowledge and not prayer. If prayer did it, then why not just pray and skip the medicine part. But no-one does that because deep down they know it wont work. They pay lip service gushingly to the supposed “power of prayer” that they were most likely convinced to be true as kids growing up in a religion but they still go to the doctor and still undergo surgery. Most believers fully well realize prayer never seems to work. Despite their words to the contrary their actions betray that they know better. Prayer doesn’t work, medicine does.
Consider also that the same procedure is performed worldwide by hundreds, maybe thousands of medical teams that don’t pray before a procedure yet it works the majority of the time, without prayer. Additionally, if the same team of doctors, nurses, and technicians held hands and prayed 50 years ago, attempting the same sort of procedure without the benefit of more recent modern techniques and drugs, it would have much less chance of success than today, prayer or not.

Billions of prayers are offered up to gods all over the world every year to save someone’s life, hoping for a miracle, yet they still die.
As but one example, today roughly 5 million children die annually worldwide before age 5 of infectious diseases and you can bet the vast majority were prayed for, dozens of times over… and they die anyway.

A real “miracle” is this:
Over 50 years ago in 1960, over 20 million children died each year before age five due to disease even though the population was less than half what it is today. How many hundreds of millions of prayers, maybe billions were offered up to gods of all sorts and regardless, none of the 20 million survived. No miracles for any of them despite hours and hours and hours of pleading, year after year after year.
Today however, 15 million fewer children die per year because of vaccines, sanitation, and modern medicine, not prayer. We may call that a miracle, but that’s a misnomer: there is nothing spiritual or miraculous about it. 15 million young lives saved each year is the result of human knowledge and human empathy. There is no “miracle” to it. This is what we can do if we keep our heads in the real world and work on our problems instead of focusing on some imaginary deity and asking his help through prayer.
It doesn’t work.
Don’t fool yourselves. Beyond maybe making yourself feel good that you are doing something in a crisis there is no power of prayer.
Better the human race should add all that effort and time wasted in useless prayer to some supposed god to the incredibly successful efforts which have eradicated disease and child death around the world and get that 5 million children that still die annually down to zero or as near zero as is possible. 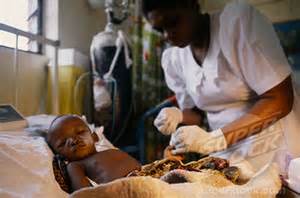 This child has malaria.
If we treat him medically, he may live
If we merely pray for him, to anybody’s god, he will most likely die.
Religion is not merely delusional, but an incredible and primitive waste of time.
We have to stop lying to children that there is a “power of prayer.”
End Religion Now.