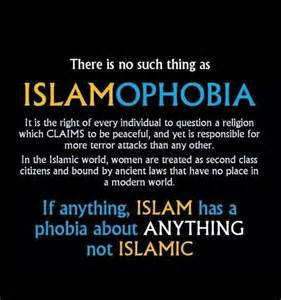 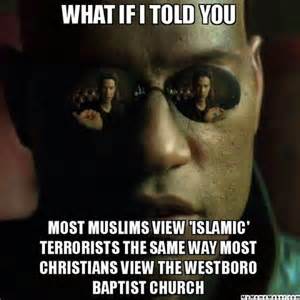 Is there such a thing as Islamophobia?
Max Fisher of Vox certainly thinks so. In his recent article Stop Asking Muslims to Condemn Terrorism: It is Bigoted and Islamophobic and other recent writings Max upholds the idea that criticism of Islam and Muslim moderates equates to Islamophobia.
From the article: “Here is what Muslims and Muslim organizations are expected to say: ‘As a Muslim, I condemn this attack and terrorism in any form’. This expectation we place on Muslims, to be absolutely clear, is Islamophobic and bigoted.” Full stop.
Max you couldn’t be clearer… and more wrong.

Muslims should apologize for the excesses of their religion: for it’s maintaining the penalty for apostasy is death (an all too real threat to ex-Muslims all over the world) for promoting the establishment of the caliphate, for approving and applying female genital mutilation thruout Muslim countries, for relegating over 500 million women to second class status, for promoting more terrorism than any other religion today, for being as stifling and anti-science as any religion throughout history, reminiscent of Xiansanity(TM) during the Dark Ages.

That isn’t Islamophobia. It is a realistic assessment of the state of Islam today as was the all too real ugly norm of Xianity for close to a millennia, up until a few centuries ago as depicted above.

The text in the image at the very top of this blog portraying Laurence Fishburne from the Matrix makes an utterly false comparison. The Westboro Baptist church under the former leadership of our good Baptist pal Fred Phelps to my knowledge never held anyone hostage and killed them as in the recent Muslim terror situation in Sydney which prompted Max to write his rebuttal to what he perceives as Islamophobic reactions.
I don’t recall Fred and family beheading anyone or calling for the death of those who left their church. Sick as that man was, he still acted within the behaviors of modern society, limiting his “god’s work” to obnoxious protests and commentary, unlike many Islamic organizations today: ISIS, Hamas, Taliban, al-Queda, etc., etc.
Take a gander at the list of terrorist organizations around the world based on both political and religious ideologies: Here.
Compare the number of Islamic vs. any other sort of terror organizations and consider their widespread impact.
Much of Islamic behavior and thinking as cited in the paragraph above is stuck in the Middle Ages: beheadings, death for apostasy, teaching Jews are descended from monkeys and pigs…they would have made good Xians a 1,000 years ago.

Speaking of good Xians, the average person identifying with Xianity today, just like the vast majority of Muslims, is not a terrorist, is not prone to violence, does not believe much of what their religion promotes and are just normal human folks trying to get by, keep the kids fed, pay the rent and have a little extra for entertainment and travel.
Hardly Islamophobic on my part, eh?

So consider this:
There are nearly as many Catholics in the world as there are Muslims (a billion plus each).
Should they apologize for their religion and the behavior and thinking it promotes?
Absolutely!. A resounding “Yes” to that question.
Consider that the unwavering Catholic doctrine of condemning birth control dooms millions of children all over the world to strangling poverty, malnutrition, disease and an early death: a subject I have written on before, Is the Pope and his Church Responsible for More Suffering and Death than Islamic State?
Does Catholic doctrine promote more suffering and death than all the Islamic terrorist organizations combined and on innocent defenseless children? You do the math. Hell, at least Muslim terrorists mostly kill each other, and as adults!
Should Catholics apologize? Uh huh.
Should Muslims apologize? Ditto
Should people of all religions all over the world apologize daily for the delusions they preach and the damage they cause? You betcha. Belonging to religions is the only thing that keeps their insane ideas going and allows more than a few to act on those ideas. Asking the religious to own up to that fact on a daily basis isn’t bigoted or racist in any way. It is a necessary first step to eliminating the problem: religion.
Max might call that “Religiophobia”
OK.