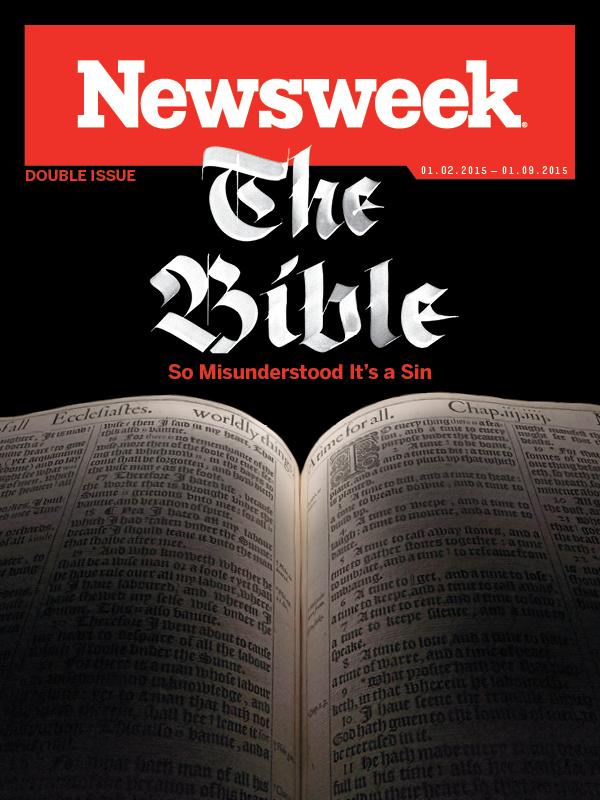 1/2/2015 Edition of Newsweek.
From the article by Kurt Eichenwald a contributing editor and journalist:
“They are God’s frauds, cafeteria Christians who pick and choose which Bible verses they heed with less care than they exercise in selecting side orders for lunch. They are joined by religious rationalizers—fundamentalists who, unable to find Scripture supporting their biases and beliefs, twist phrases and modify translations to prove they are honoring the Bible’s words.”

You can read it for yourself in its entirety HERE.

There are number of observations to be made about the article. First and foremost that Biblical Criticism makes national mainstream media, and especially Newsweek which is known for its special editions on Jesus and Xianity at Christmastime is a big deal. That’s huge, in fact. Whether Eichenwald’s own interpretation of the Bible’s message is better than anyone elses or not (and plenty of commenters and Xian apologists and Evangelicals and Catholics and…heartily disagree with him), he at least provides a number of important facts about the Bible every Xian should know but probably doesn’t. Bringing that level of Biblical history and criticism info and discussion to mainstream media is fantastic.
Eichenwald of course, thinks others are “cafeteria Christians” but he has the real goods. Right.
He picks and chooses and emphasizes one verse over another and prefers one interpretation of a given verse over another just as much as any other Bible believer.
Despite that his presentation of the differences in the thousand of recopied copies of the text, including whole added sections like the Johannine Comma (“He who casts the first stone…”) and the multiple endings of Mark, some pasted on as late as 1,000 years later during the Middle Ages should give Xians pause about any hope of maintaining innerancy of the Bible. All Xians should know what scholars know about their “Good Book” as many if not most Xians are woefully uninformed about their sacred text:

“The Bible is not the book many American fundamentalists and political opportunists think it is, or more precisely, what they want it to be. Their lack of knowledge about the Bible is well established. A Pew Research poll in 2010 found that evangelicals ranked only a smidgen higher than atheists in familiarity with the New Testament and Jesus’s teachings. “Americans revere the Bible—but, by and large, they don’t read it,’’ wrote George Gallup Jr. and Jim Castelli, pollsters and researchers whose work focused on religion in the United States.”

Eichenwald then recounts a bit of the politics behind which stories and what interpretations of scripture became orthodox and made it into the New Testament, the sectarian violence over such disputes and the existence of the many Apochryphal gospels and epistles that didn’t make the cut. More and more is such info becoming common knowledge…all to the better. His explication of the contradictions of the only two Gospel stories recounting the birth of Jesus in Matthew and Luke is a bit confusing but the point is clear: Xian apologists have to do mental gymnastics to reconcile the contradictions and outright fabrications in the two separate and conflicting first Christmas accounts. Likewise, the irreconcilable contradictions in the 6 different Resurrection stories in the Gospels, epistles of Paul (nearly half of which are forgeries) and Acts are exposed.
Eichenwald:
“None of this is meant to demean the Bible, but all of it is fact. Christians angered by these facts should be angry with the Bible, not the messenger.”
On the conflicting Creation and Flood stories in Genesis:
“These conflicting accounts are only serious matters because evangelicals insist the Old Testament is a valid means of debunking science. But as these example show, the Bible can’t stop debunking itself.” and
“Evangelicals cite Genesis to challenge the science taught in classrooms, but don’t like to talk about those Old Testament books with monsters and magic.”
Pretty strong stuff for mainstream US media.
He then does a lengthy analysis of the writings ascribed to Paul both those accepted by scholars as genuine and the obvious forgeries in his name. Eichenwald discusses how Evangelicals pick and choose emphasizing the damnation of homosexual behavior and ignoring so many other sins considered equally bad. It is worth the read.

Eichenwald of course cant diss the Bible, only its interpreters:
“So why study the Bible at all? Since it’s loaded with contradictions and translation errors and wasn’t written by witnesses and includes words added by unknown scribes to inject Church orthodoxy, should it just be abandoned? No. This examination is not an attack on the Bible or Christianity. Instead, Christians seeking greater understanding of their religion should view it as an attempt to save the Bible from the ignorance, hatred and bias that has been heaped upon it. If Christians truly want to treat the New Testament as the foundation of the religion, they have to know it.”

Newsweek certainly wouldn’t publish his rather detailed and critical analytical piece if he concluded instead with saying:
“It’s all bullshit, reads like myth embellished over the centuries, so lets drop the damn thing in the wastebasket where it belongs…or at least put it on the shelf with all the other myth of ancient times and places”
So I said it for him.

over 2,500 comments to date….
the discussion is mainstream, education is key:
Information Kills Religion.

One thought on “Newsweek on the Bible: Criticism Riles Xians”