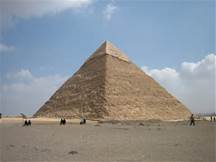 The Great Pyramid of Khufu (Cheops) Giza, Egypt.
An amazing feat of human engineering to honor one of the early Egyptian Pharoahs, built in 2,500 BC…4,500 years ago. Think of it. The Roman Coliseum was built around 70 AD, so the pyramids were already older to the Romans than the Coliseum is to us today, by a half of a millenium.
I found this killer video on Youtube, Climbing the Great Pyramid of Giza. It’s only 2 minutes, do give it a look!
That’s a 52 degree slope going up the pyramid which you really get a feel for in the video!
The blocks he climbs up on are the interior structural blocks which used to be covered by smooth faced casing stones which have all been carried away over the centuries, leaving the stair-stepped interior stones which are certainly easier to climb. The Great Pyramid is 455 feet high and covers 14 acres. 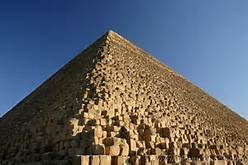 Khufu was of course immortalized not only by this magnificent burial tomb of his but also in the Jerry Garcia classic SUGAREE.

The Great Pyramid made the news recently as the subject of a Republican Presidential candidates pronouncement as to its purpose. Of course I am referring to Ben Carson’s absurd claim that the pyramid was built as grain storage facility, not as as memorial structure or monumental tomb, and not by Pharoah Khufu, but by the Biblical character Joseph.
A few minutes perusal of any number of voluminous sources on the Pyramids of Egypt or just a moments conversation with any competent archaeologist or Egyptologist who actually know something of the pyramid’s construction and Ancient Egyptian culture would dispel that totally off the wall assumption made by the good doctor in a heartbeat. But no, Ben Carson was almost proud of making his absurd claim. 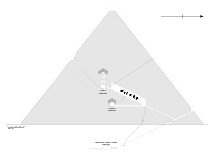 One can see from the diagram above, the three chambers that make up the only spaces inside the pyramid are but a tiny fraction of the immense volume of the pyramid and are connected by 3×3 foot sloping passages which extend hundreds of feet at steep angles. Not much storage area and pretty difficult access.
In addition, there is no evidence in 150 years or more of detailed and extensive research that the pyramids of Egypt were ever used to store grain. They are all commemorative monuments and/or tombs.

The abject arrogance of Ben Carson’s “grain storage” pronouncement is only surpassed by his obvious pride in holding to such an outlandish claim which is doubly disturbing given his proven formidable intellect and accomplishments that I have blogged about before HERE.
Faith does this. Religious belief in its arrogant, prideful ignorance of facts makes an otherwise intelligent human make jackass proclamations that go against all good sense and information. Even his Seventh Day Adventist brothers in Christ who believe a batshit crazy version of Xiansanity that rivals Mormonism, won’t jump on board with his ludicrous view of the REAL reason Khufu’s tomb was built.
Yup, 10-40,000 workers, assembled over 2.3 million blocks over 10-14 years in a stack 455 feet high…just to store a few bushels of grain.

This is your brain on religion.