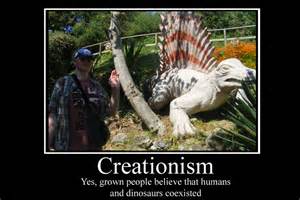 Dinosaurs and humans coexisted, the earth can’t be more than 6-10,000 years old. You must believe in an extreme, wholly absurd interpretation of the Genesis account in the Bible.
How impossible is it?
Consider this excerpt from my forthcoming book, “The Arrogance of Religious Thought”
“When I discuss the age of the earth, the fossil evidence that makes humans and dinosaurs living together utterly preposterous, the genetic evidence that refutes any attempt at a literal interpretation of Adam and Eve, or the comparative genomics of dog evolution which confirms the symbiotic evolution of dogs from wolf ancestors tens of thousands of years ago, I am reporting the science, not interpreting it. I’m communicating and explaining the data and the consensus of hundreds of thousands of scientists who work directly in those and related fields. I’m telling you what we know because of what practicing scientists in the relevant fields know. I am acting as a reporter, a science journalist, a teacher who has enough education and familiarity to write accurately about what the experts in those fields know and convey it accurately. I am not countermanding, nor refuting, nor denying the science. Conversely, Ken Ham’s underlings, (and Hugh Ross) just because they have PhD’s, whether theirs is in a related field or not, are insisting all those scientists and all that science is wrong. Ham contends that one or two people, with somewhat related degrees, who don’t even work in these fields, can completely overturn what thousands of scientists know and work on every day of the week. Somehow Ham’s employees know better than entire disciplines worth of scientists who actually do the research, solely because the revisions and denials of AiG employees must comport with Ham’s extreme Creationist interpretations. That’s the absurdity, the 24 karat chutzpah, the absolute arrogance of religious thought.”

That was written well over a year ago and while researching images for this post I found this meme that makes the same argument, and excellently:

And the excerpt continues:
“I teach courses in Developmental Psychology. My PhD allows me to be familiar enough with the subject and its research to lecture competently on the current findings from an up to date textbook that contains the latest knowledge gleaned from thousands of studies published by thousands of child development researchers. It would be absurd enough for me, even with a degree and research experience in the same field to insist that all those scientists, all those studies were wrong: that an entire field was hopelessly incorrect and all its practitioners thoroughly deluded just because I said so. But that is exactly what Ham’s hired hands do, and without relevant background in most of the fields they pretend to overturn all consensus on. All based on a very stretched and imaginative literal interpretation of Genesis. Ya gotta admit they got balls, if not brains. Just because you have earned an advanced degree doesn’t mean you’re a genius.”
“But if you claim to have special knowledge and with it have outwitted entire fields of science and equally bright legions of scientists you better have more than the ancient musings of ignorant goat-herders in your hand.”
“The whole Creationist enterprise is bankrupt from the start. There’s all the evidence that unequivocally supports evolution, supports it to the point it is absurd to deny it, like denying gravity. If there is anything Creationists are competent at, it is absurdity and denial. Creationism is one of the most striking examples of the conflict of religion and science in this country and around the world. What the average believer bamboozled by these charlatans doesn’t consider is the sheer enormous volume of information that we use every day that must be hopelessly wrong in order for the deniers like Ham, Comfort and Ross to be correct in the slightest degree.”

The next installment on the abject absurdity and impossibility of Creationism will provide just a smidgen of the scope of the science that must be denied.