Waleed El Husseini
“There is an atheist in every Arab family” via Bread and Roses TV.
Fariborz Pooya and Maryam Namazie’s latest installment of “Bread and Roses TV” on Youtube features Waleed el Husseini new author of “Blasphemer” living in France now having come out as an unabashed atheist in his home country, Palestine.
Do listen to his interview which starts at 7:10.
Waleed sought asylum in France after a jail term in Palestine for blaspheming Islam on Facebook.
From his wiki:
‘In an essay entitled “Why I Left Islam” on his blog Noor al-Aqel (Enlightenment of Reason), Waleed Al-Husseini wrote that Muslims “believe anyone who leaves Islam is an agent or a spy for a Western State, namely the Jewish State… They actually don’t get that people are free to think and believe in whatever suits them.” Husayin emphasized that he was not implying that Christianity or Judaism were better than Islam, and that in his opinion, all religions were “a bunch of mind-blowing legends and a pile of nonsense that compete with each other in terms of stupidity”‘

Laws against blasphemy with imprisonment, lashings, even death as punishment are so common and widespread in Islamic countries they merit their own wiki!

Coming out as an atheist will get you the death penalty in 13 Islamic societies. Despite this, ex-Muslims are coming out all over the world. I’ve blogged about the incredible bravery of Muslims speaking up against their religion before HERE.

Even with the threats of imprisonment, torture and death, Waleed maintains what one would think to be impossible: “Every Arab family has at least one atheist…”
Maryam Namazie and many other vocal ex-Muslims maintain the average Muslim living in any of the Islamic nations are so far beyond weary of the Islamist thinking that is so prevalent in their societies that they are daring to question, even talk against it like never before. Many are calling for reform to tone down the stifling wet blanket that is Islamic thought pervading every aspect of their daily life, every waking moment for so many around the world…and many more are calling for dropping it altogether. 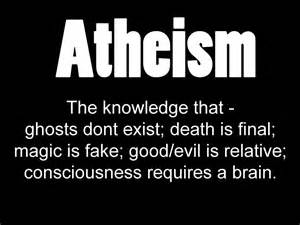 People aren’t stupid. Merely indoctrinated or imprisoned in religious culture they cannot escape. People are catching on all over the world to the idiocy and repression of religious thinking.

Waleed says there are no good estimates on the number of atheists in the Arab world as those blogging or writing on Facebook are forced to use phony names and profiles, and fake pictures, or else be killed.
But as he and Maryam also agree, all over the Arab/Islamic world people know better. They don’t buy it any more, just like with Xiansanity. And just like Xiansanity throughout the world where there are a whole lot of folks who are Xian in name only…just maybe there are just as many Muslims who know better and can’t speak up. Waleed may well be right.
The world is figuring out the insanity and stupidity of religion, even in the worst of places.
end religion now.
All of them.

One thought on “An atheist in every pot…”