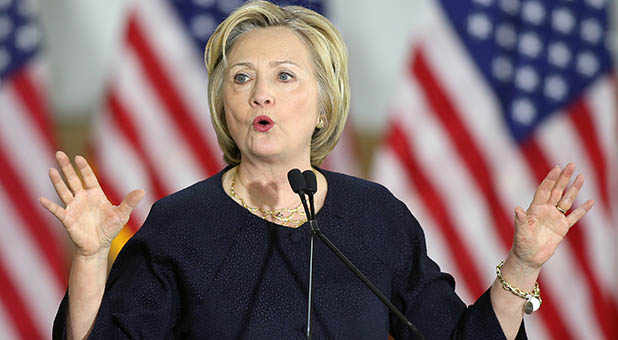 Hillary Clinton, in a speech in Cleveland on Monday 6/13/16 covered by the USA Today in Traditional GOP ‘bump’ after terrorism may elude Trump finally used the phrase “radical Islamism” and criticized the Kuwaitis and Saudis for funding the terrorism they have exported globally using the world’s oil money.
As part of USA Today’s coverage a day after the Orlando nightmare, on the same page, another article just below the one on Hillary Clinton’s speech linked above, provides a striking juxtaposition of her coming to grips with reality. Another world “leader” yet wallows in wishful thinking. I’m referring to the Dalai Lama leading a prayer for the Orlando Massacre victims which you can read about HERE.
In a smart political move that at last owns up to the reality of the violence that Islam with its peculiarities foments more than any other religion, Hillary Clinton moves the discussion to a more realistic level, echoing what commentators like Sam Harris and many ex-Muslims have been trying to tell us for the past 10 years or more. It is heartening from my perspective to witness such sea-change in the public analysis of religion.

Here’s Sam Harris from just over a decade ago explaining the issues with the Islamic approach to the world:

We are making progress when the liberal Presidential Candidate finally says it like it is. While we wait and argue for calling a spade a spade, the progress seems glacially slow and often hopeless, but in perspective, change is happening, and fast. Sam Harris was pretty much alone as a Western liberal calling out Islam when he published End of Faith back in 2004. Only Ayaan Hirsi Ali was as well known as an ex-Muslim speaking out vociferously against Islam. Ten years later there is a whole host of ex-Muslims, historians, secularists and now finally, politicians discussing the situation openly. That is fast social change. With the Orlando Massacre, the discussion is everywhere, daily on every sort of media. That serves to get the information out there to the entire public. It becomes very difficult in light of real knowledge about the peculiarities of Islam to excuse Islam with denials such as “all religions are violent” and “its not the religion, its just extremists hijacking the religion.”
Public knowledge and discussion has never moved this fast. When a Presidential candidate is at last moved to echo Sam Harris in but a decade, that’s progress, and Enlightenment.

It will take a bit longer to move folks forward on the phony claim of there being a power of prayer that the Lama himself has published is useless…but he still prays with the faithful. He’s a nice guy personally it seems, but he is as bad as the Pope is in making nice, politically correct public statements, while maintaining an unyielding religious stance.
An excerpt from my forthcoming book, “The Arrogance of Religious Thought” describes the Lama’s published realistic views on prayer:
“Tenzin Gyatso, the 14th Dalai Lama, became truly enlightened in rather a more mundane way. In one of his many books (he is a one man publishing house), Beyond Religion, he admits that other than some psychological benefit to the one doing the praying, the power of prayer is useless. The power of prayer is bullshit, basically, is his conclusion. He became enlightened in the true New Enlightenment sense of the word, through 70 years of observation, travel, learning, living in this world, gathering evidence here on earth and not in some imaginary, ethereal plane. Information killed that idea for the Lama himself. Gyatso, has experienced how the world works, over a lifetime of travel and connection, with world leaders and people of differing cultures. As a result; he knows better. He has learned the power of prayer is useless, and that religious divisiveness is both wholly unnecessary and detrimental to human well-being.”

So one world leader has been moved to acknowledge reality and another (a relgionist, no surprise there) despite admitting in his own written words that prayer is a waste of time, still keeps the fantasy alive to the elucidation of no-one.
We will keep working on the hoodwinking of the faithful all over the world that there is an effect to be had from supplication to some deity.

One thought on “Reality, finally and fantasy still: Hillary and the Lama.”