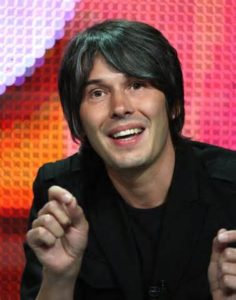 Brian Cox.
Physicist and science educator Brian Cox stuck his neck out, quite on purpose I think, and made the claim that experiments done at the LHC (Large Hadron Collider) at CERN (European Center for Nuclear Research) in Switzerland prove their are no ghosts, there’s no such thing. Hadrons are things like protons and neutrons that make up the nuclei of all atoms and the LHC is a giant ring “atom smasher” under the ground that accelerates protons to near the speed of light and smashes them together so physicists can investigate what our world is made of. Not that they are looking directly for ghosts or souls, but they don’t find any either, ever, in any physics experiment. And that is precisely his point.

From the article: “At least four in ten Americans believe in ghosts, and it’s likely that even fewer people are aware of the LHC.”
Cox:
“If we want some sort of pattern that carries information about our living cells to persist then we must specify precisely what medium carries that pattern and how it interacts with the matter particles out of which our bodies are made. We must, in other words, invent an extension to the Standard Model of Particle Physics that has escaped detection at the Large Hadron Collider. That’s almost inconceivable at the energy scales typical of the particle interactions in our bodies.”

The idea that there is some glob of “energy” separate from our bodies, from matter, that contains our “mind” where we really reside, a conscious self that lives on in our “soul,” which survives the death of the brain and floats around somewhere, somehow, to sometimes interact with those of us still living who are yet connected to our bodies and brains, which show up on occasion as a ghost is a very old and entrenched one. It is hard for us to accept the possibility (the reality as far as I am concerned) that we are just are collections of neurons, wired uniquely as only human brains are, and uniquely configured through our very individual developmental trajectories, culminating in our very own personal experiences, memories, skills, personalities, intellect and self-concept, which did not exist before we were born and cease to exist at our death, with the end of the functioning of our brains.

If you scroll down to the comments on Cox’s observation, you get a real feel for that entrenched, commonsense assumption, or better yet highly emotional demand that of course souls, ghosts, mind, and consciousness all exist separate from the brain and physical matter without question!

To paraphrase and summarize the collective consternation of many of the commenters:
“Why cant those damn stubborn scientists just accept the pronouncements of the ancient mystics and New Age gurus along with all the priests, popes, imams, and monks who ever lived, and my Aunt Jane, that of course our conscious mind survives the death of the brain: that’s our immortal soul, you dummies. Everybody knows that!”
(Which sometimes scare the shit out of us when they decide to appear to us in ephemeral ghostly form).

Folks have a hard time hearing, that despite 3,000 years of wishful thinking and proclamations from the the world’s religions, after over 150 years of neuroscience and modern physics, there is absolutely no evidence whatsoever for souls, ghosts, or minds separate from brains (or unicorns, or fairies for that matter). Mind is what brain does and there is no separate ghostly spirit energy; no soul.

Physics has shown there is no such blob of energy to be found, neither in every other kind of physics experiment ever conducted, nor in the data from the operation of the LHC, as Cox succinctly explained.

Another physicist and science educator, Sean Carroll, provides a detailed exposition of the null results about claims for a soul/ghosts from modern physics HERE.

In addition, for just one small, but damning, and enlightening piece of evidence from modern neuroscience, regarding the undeniable connection of our conscious experience, our self, to the workings of our neurons, watch V.S Ramachandran, in the 2012 Gifford Lectures in Glasgow, Scotland describe the rubber hand and table delusion, (at the 59 minute mark of the lecture). The mind, the “soul,” our conscious experience, is inextricably bound to the body and brain whether we like it or not.

Theologians proclaim that our soul must exist in some ghostly form of energy, and that we will never explain our subjective experience from mere operation of neurons. Many philosophers concur, yet stop short of buying into the dualism of ghostly souls, while tellingly never offering an alternative explanation for how or why the material brain isn’t the source of the conscious self said to exist in our somehow separate soul. At least the religious offer an argument, however old and unfounded. (The discussion of the philosophical positions on the dualistic ideas of consciousness is a subject for a whole other post for the future).

Significantly, we can alter the perception of our own selves within our bodies by simple experiments, sending conflicting information into the brain to re-interpret one’s normal sense of embodied self. We can dramatically, (and creepily), change how we feel where our touch sensations originate; from our own hand into a rubber hand or even a table top! This is but one of dozens of neurological instances that scream out our sensations, feelings: the supposed unexplainable (for some philosophers) holy grail of subjective experience (qualia), are not merely correlated with, but caused by certain operations of the neurons in our brains. The subjective feelings we experience come from the brain, not our separate soul, not some ghostly spirit.

Brian Cox, takes the refutation of dualism one step further. There is no “energy” or “entities” that have been found that have the properties of ghosts, souls, disembodied minds. We know the energies and particles the world is made of, no “energy” proposed to constitute our ghostly souls, our consciousness beyond the brain exists. All the evidence from neuroscience points to the brain producing mind, no separate ghostly soul needed. All the evidence from physics says such things as ghosts or souls do not exist, never did. They are merely old ideas.

It is only from the long lasting and very powerful cultural dominance of these very old, almost childlike explanations from millennia ago, still paraded out by the world’s religions as unquestionable truths, that the average person reacts, often so vehemently offended; dismissing of what science is telling them. Brian Cox did them a favor in challenging the cultural inertia regarding unfounded spiritual claims, but another example of the blatant arrogance of religious thought.
It is time we stop hosing another generation that any of these 3,000 year old conjectures are actually true.