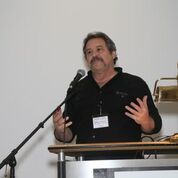 (as recent a photo as I got. But a few months old, speaking, talking with my hands as usual, wanting to convey information as usual as well…it is what separates us from the animals, it is all we got, and the more info we disseminate to each other, all the boats rise).
Aug 29 1954. The story goes my Ma had silent sorta labor and when she was ready it was run up the steps of the hospital, cuz this thing is coming out, and right now! So if I recall correctly, since there was no hospital built yet, in Woodstock, IL where we had an apartment in town, the nearest hospital was in Harvard, just a dozen or so miles up the road. And I guess she did run up the steps. I don’t remember the time I popped out or the details of length and pounds anymore, cant barely remember my own kid’s baby specs now. I’d have to consult my sister, she’d prolly know.
Fuck, I’m just grateful to be here 63 years later. Alive and kickin’, its allgood.

Fortunate. Yeah, living paycheck to paycheck, way too much debt again. Wish I could say we pissed it all away in Vegas or on a trip to Europe, but nope, just fixin’ old cars, and paying the regular bills. Like most Americans nowadays, from data I saw recently in the paper: the majority of folks in America are living check to check as well now. The new normal. The middle class gets to dig what the working poor have struggled with all along.

So I sat out at the sports bar in Bumfuck, no hockey games on yet (6 more weeks, but who’se counting?). B-ball on one TV (gag me), Lord of the Rings which I have never seen, on the big screen right in front of me. America’s Talent or Dancing with the Stars or some shit is on the other one, never seen that neither. Fucking dance routines bore the shit out of me as much as basketball. Oh my, and Vanilla Ice, (Kid Rock’s spiritual white trash godfather) has his own show now evidently. Redneck drywall monkey, flippin’ houses. Glad he’s got a paying gig. It’s a beautiful thing. And the best thing on is the Food Channel, wicked looking pit roasted pig and grilled steak. AOK. Man-Fire-Food…grunt, grunt, grunt.

And Trump is the biggest asshole on earth, have I mentioned that yet? What a sick fuck.

He dissed every POW that has ever been when he shot his big mouth off that he didn’t like John McCain, cuz he didn’t like guys that got caught. How in the hell any vet could vote for him after that is beyond me.
The horror McCain suffered through is almost unimaginable. But I don’t wanna waste my birthday observations on the conman scumbag who happens to be in the White House.

There is too much good going on, all over the world to despair. Secularism is on the rise. Violence, tho still too prevalent is at lower levels than anytime in human history. Our standards have risen, and we find minor transgressions appalling. Yes, there are some horrific goings on in various parts of the world, but it is on a scale greatly lessened from the mid 20th century and anytime before. Kim Jong Un, the only sicker fuck than Trump, (well maybe Putin, but he doesn’t appear sick like the other 2 ugly buffoons, he is just one cold, calculating, bastard), is starving the entire populace of No. Korea and killing more than we can find out, but he would have to kill everyone of his 25 million citizens and still not be up to the numbers of people killed during Chairman Mao’s “Great Leap Forward” in the 50’s and early 60’s. He would have to dip into So. Korea and find another 10-15 million to get up to Mao’s level of slaughter. So the thousands, tens of thousands that die from his policies, is incredibly horrific to be sure, but think of an entire country-full; 30-40 million wiped out, most starved to death, in but a decade or so. Unbelievable. And we could add Stalin and Hitler’s 20-30 million more to that mix, not counting the deaths directly attributed to WWII…

So, on my birthday, I’m optimistic. We’ve got a majority of democracies among the world nations now, (120 plus out of 192 nations), and secularism is rising worldwide. Sure, religions are strong and growing here and there, across the Muslim world mostly, but even within those countries, secularists are speaking out, coming out like never before.
And I got a real job. At least for the next full year, if not beyond. So long as I don’t screw the pooch and mess up a great chance to make my new job permanent next year, I should have a damn good chance to have them hire me on next spring. Its a great opportunity. So I’m fortunate, after having pursued nearly 100 positions over the past 6 years, since before I left Kentucky in 2013.

Happy Birthday to me. 63. Its been a damn good one. Worked hard, good classes, read a lot, learned a lot, just like most days. Glass of wine, writing, get to go home and see my darling bride and fam this weekend. Could be one hell of a lot worse. We could make this Earth a veritable rockin’ paradise if we can get rid of all the old thinking that religions maintain which yet hold further progress back: like the divisiveness we see in racism, nationalism, religious identity, homophobia, misogyny, reluctance for progress and outright science denial…all due to religious thought. Yup, we are progressing, in spite of so many old, entrenched, ideas. A good thought for the evening of the beginning of year 64. You take the cards you are dealt. I’m so glad to be still in the game!

(Back to the critique and analysis of religion next week, with all things scientific and secular to be celebrated).