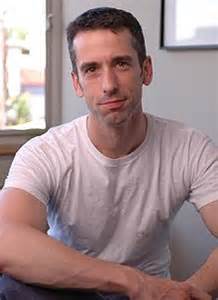 A student friend turned me on to Dan only a few months ago. I’d heard of him and his column but didn’t really know anything about him until I watched 2-3 videos and then read this article on him in the Humanist.
He is my new hero. Here I am calling for us secularists to be strident and Dan is already out there doing it!
His stints on Bill Maher are fucking priceless if you haven’t seen those. He won’t buy into being nice for the sake of being nice. As a gay man he should be pissed off! He pushes boundaries utterly matter-of-fact.
Start with this clip of Dan on Bill Maher’s Real Time: Talk about your “matter-of-fact-pushing the envelope.”

It reminds me of the early 60’s with Lenny Bruce saying “dirty” words and exposing that absurdity. People would just cringe, or be “oh so offended” or angry as hell. But many were thoughtful, and many were supportive. His envelope pushing displayed the idiocy for all to see and made the debate over language and “dirty” words mainstream. It opened the way later for Carlin and HBO and the big change in the 80’s. Now censorship is limited to small corners of media and dirty words are a part of the culture. No big deal: except among the Conservative Xians in this country of course.
Dan is pushing the envelope with matter of fact talk about sexual practices and the idiocy of homophobia. That’s how these ideas could become main stream in another generation or two. EXCEPT… this isn’t the 60’s 70′ or 80’s.

It is 2014. And we are approaching the 10 year anniversary of the New Enlightenment and (wait for it)…
WE have the Internet!!!: Facebook, YouTube, Reddit, Tumblr, Skype, email, blogs, etc., etc.
How fast can we turn things around with this instant and voluminous information transfer? Smartphones accessing the NET full of info in everyone’s hands and computers on and connected 24/7 in billions of households.

My last post was on the young Evangelicals catching on damn quick, in less than a generation, to how absurd their holding onto the Biblical “clobber” passages that fuel homophobia truly is. See Rachel’s post again on Literalists and Gluttony.

They are struggling with it, but to their credit “seeing the light.” Do you think it likely they will have the exact same discussion in 10 years? NO, fuck NO. They will figure it out in another year or two.
My guess is any given person who was participating in Rachel Held Evans blog discussion I posted about won’t just drop it. The discussion, the mulling it over, the reasoning will continue at home, with friends… and it won’t take them but a year or two, IF THAT, maybe only months, to realize their position is untenable… and drop their homophobia.

Information Kills Religion. I do not believe these young Evangelicals having a rational discussion about it now, getting to know some gay folks, reading other sources and discussions like my blog or seeing the same back and forth on TV, in FB discussions, will still be scratching their heads about it 10 years from now. They will be well past it. They will figure it out in much less than a generation. There is too much information at hand to crawl back into the Xian cocoon they were brought up in. They will drop homophobia altogether or modify their views so much, become so liberal about it, they will need to turn in their Conservative Christian card as they let the gays off the hook.

I suspect this strongly and will be looking for such signs in the near future, especially on Rachel’s blog: that they then can’t escape their own logic over the absurdity and cruelty of homophobia.
AND I REALLY SUSPECT they will continue the logic to other passages, to other Xian claims they were told were just as true and unquestionable as gayness being a sin and a “choice.” And dare they read Sam Harris or Bart Ehrman or Dan Barker or Hitch or Dawkins it won’t be just holding onto the “clobber passages” that will seem absurd. The whole edifice will come crumbling down for many of them. Dan Barker and Jerry De Witt went down the same path, at the same age, in their 30’s, and it took years to get free. And those two and many, many, others went from hardcore, no ifs, ands, or butts (ha! it was there I had to take it) Conservative Xians to all out non-believers.

Some will fall right off the Xiansanity™ wagon; others won’t go that far. But if Xians of any stripe ultimately retain their belief… groovy!!; I wager they will at very least question and modify so much of their belief once they start on the path I am seeing in the blog and FB discussions that the effect we secularists work for will be achieved regardless: that they keep their beliefs to themselves.
That they jettison the Arrogance of Religious Thought ™ and stop judging others by selecting verses from that nasty book and quit telling others how to live their lives whatever bits of Xianity they retain. Many of the Evangelicals on Rachel’s blog are on the path already, although they may not realize it. They’re not stupid. And they are becoming enlightened…

So Dan Savage’s envelope pushin’ pisses off a few people, offends some others. And folks decry that his “matter of fact bluntness” does his cause more harm than good by alienating the people he’s trying to reach.
BULLSHIT.
It worked for us with Lenny and dirty words, and anal sex, and tats and piercings. Progress happens by folks pushing the envelope. And a few get offended, not many, not all, and it doesnt hamper the cause or the effect at all. Stridency works: making a loud or obnoxious noise that can’t be ignored.
Thnx Dan.
Enjoy. We can win. Maybe we’re winning.