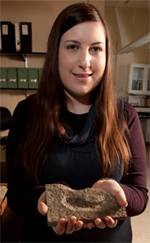 Lauren Sallan, PhD in Integrative Biology from University of Chicago, now working her own lab at University of Pennsylvania studying patterns of evolutionary change in the fossil record of the last 500 million years or so, (especially the fish fossil record), delivers a couple of very entertaining and informative TED talks.

Her 2019 TED talk: A Brief Tour of the Last 4 Billion Years-Dinosaurs NOT Included, covers that 500 million years of phenomenal fish, plant, arthropod, and land animal evolution and yes, without spending any time on the dinosaurs! She very smartly and humorously shows how much else is fascinating in paleontology besides the “terrible lizards” we all know so well. The diversity and complexity of life on earth with or without the dinosaurs is staggering and at once intriguing.

Her previous TED lecture from 2017 gives us a glimpse of how fortunate we are to be “winners” in the evolutionary game of mass and continual extinctions.

Lauren, to me, represents the next generation of researcher-scholar who despite solid credentials and an established research program is still a “regular person”-you probably wouldn’t peg her walking down the street as a U of Chi PhD in Integrative Biology…and by her off the cuff way of speaking and the humorous delivery in her talks, again you might not think “egg-head scientist” or “elitist.” No, she’s your neighbor, somebody’s wife or girlfriend, someone your kid went to hi-school with. Regular, normal folks.

The point I’m trying to make, besides that these younger generations of whipper-snappers (Gen-Z and Millenials), tend to come across less formal, less stuffy, while being no less bright or dedicated to their profession-in this case paleontological research: is that they ARE the folks next door, all scientists are just like us, regular folks too.

Along with the backlash to following the science on COVID from our ignorant and scientifically illiterate con-man in the White House, and his equally science denying Evangelical Christian Vice President, we see the science-denial of religious conservatives rearing its ugly head in the form of refusing to wear masks in prevention of COVID. And we see the attacks on experienced scientists like Dr. Fauci by right wing commentators on Fox News.

An oft-heard claim was repeated recently by Kristi Noem, Governor of South Dakota who in defiance of her states growing coronavirus outbreak (on the heels of the largely also defiantly maskless-Sturgis motorcyle rally which is already related to hundreds of cases of coronavirus across 1/2 dozen states), and the risk to thousands at the upcoming S.D. State fair is reported to have railed against the-

– stating unequivocally there will be no mandatory masking at her SD State Fair!
(Or anywhere in her State, she steadfastly refused the pleas of the mayor of Sioux Falls, SD to enact masking when his city underwent one of the earliest and weidespread meat-packing plant coronavirus outbreaks back in April that infected hundreds and killed at least two initially, and affected his entire city).

This rejection of the science and supposed “control” by the “elitists” comes despite the situation in SD as reported in the USA TODAY:
“The Mount Rushmore State has recorded the nation’s third-highest rate of coronavirus cases per capita over the last two weeks, according to The Associated Press, and the highest per-capita rate in the nation for the past seven days, according to New York Times data.”

Won’t follow those damn scientists, what do they know anyway, right? She also supported the use of hydroxychloroquin, following Trump’s lead – again the hell with the science and “so-called experts”.

What I hope to see with the coming generations, besides the further diminishment of religion, is the continued mainstreaming of science and scientists like Lauren Sallan. Scientist aren’t just old white guys in lab coats anymore. That perception is 50-100 years out of date now. Scientists are folks like Dr. Sallan, and they are not “elitist” and often do have expert knowledge that is shared with thousands, millions of other scientists who work daily in any given research area. They share that knowledge to the benefit of us all…If we aren’t brainwashed by conservative religion and trained to ignore it…