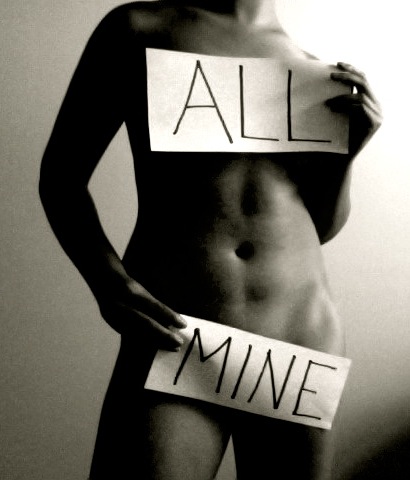 All Mine— Leila’s Story

WAZ note: This is excerpted from Ex-Hijabi Photo Journal on tumblr. If you continue to scroll down on this site earlier content appears. It is definitely enlightening and at once difficult to hear the stories of young men and women trapped in the religious stranglehold that is mainstream, moderate Islam. When I read or watch videos of Muslim apologists like Resa Aslan, Karen Armstrong and others, my blood boils. Read for yourself what its like to live under even “moderate” Islam.

from exhijabi…
“While growing up in the United States, I was constantly bombarded by images of the “ideal” beauty: models and actresses, who were taller and thinner than me, with fair skin and delicate European features. I was noticeably different; being a petite South Asian, with naturally tan skin and an “interesting” face, which many admitted was pretty, in an “exotic” way. But I never saw anyone in movies or magazines who looked like me, so I began to question how attractive I really could be.

I also often wondered how my life would have been different if I had just been like the majority of my classmates: White and Christian. Though the latter was a loose term for most, really just indicating that they would have family over around Easter and Christmastime. I was jealous of all the fanfare surrounding their holidays, and I was jealous of their freedom. The freedom to wear what they want, study and explore their interests, and date and marry whomever they choose.

While my parents are considered “moderate” Muslims, they are quite conservative next to the typical American parents. They immigrated to the States from Pakistan, bringing along with them the religious and cultural norms they were raised with. No drinking, smoking, consuming alcohol or pork was allowed, and they expected their children to behave accordingly, all while avoiding premarital sex and romantic relationships with non-Muslims.

As a woman however, there were a few more rules that I had to adhere to that didn’t apply to my brothers. I wasn’t allowed to show my knees or shoulders in public or at home. Tank tops, mini skirts, and bikinis were out of the question. Lengthy dresses still had to be loose fitting and opaque. Even in the privacy of my own room, and my own bed, I was expected to cover my arms and legs. There was also no swimming in gym class, no dancing with boys, no sleepovers, no dating, and no kissing allowed. As you can imagine, the rules made it extremely difficult to be accepted as a “normal” kid.

For years, I have tried to fit in. I have tried to pass as the All-American girl-next-door. But I am not her. And I will never be her. Finally, I now realize that I don’t need to be. My experiences have made me an interesting, unique, strong, and ambitious person. I have value just as I am and I am beautiful just as I am. And I will not censor myself for any man or god or society.

One day, when I am financially able, I will leave my parents’ home and be free to wear whatever I want. My body, my behavior, my relationships, my career, my marriage, and my future will be mine. ALL MINE.

Maybe I’ll be an actress or a model or a writer. Maybe I’ll be on TV and in magazines and a little brown girl will see me and think to herself that she can do anything.

I don’t know. All I know is that the future will be mine, and I will do as I goddamn well please.”

Leila* is a 23-year-old closeted ex-Muslim living in the United States. Her identity has been concealed given her personal circumstances. Any resemblance to any persons, living or dead, is probably coincidental.
*- Name has been changed.
nsfw
ex-hijabi