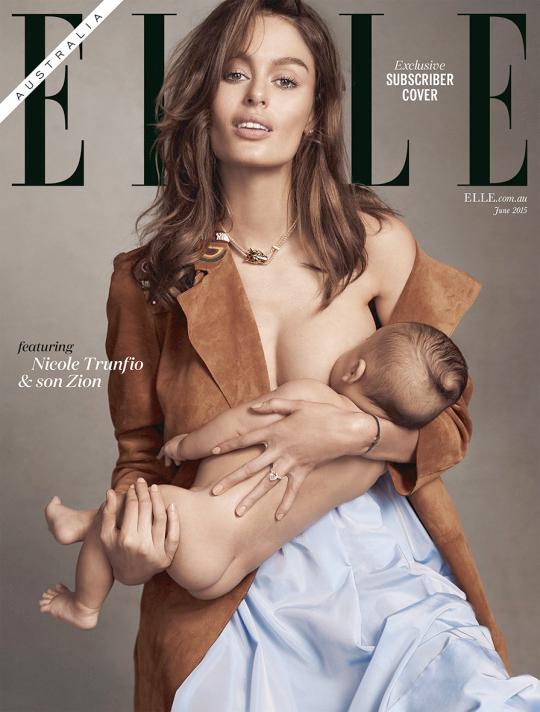 Elle Australia didn’t sell the above cover of their June 2015 issue on the newsstands, only subscribers saw this cover. The editor defends that decision here.

The cover model Nicole Trunfio just nailed it:
“There is nothing more beautiful and powerful than motherhood.”
Done.
But in our modern culture still reeling from the ridiculous perspectives of Xiansanity(TM) the editor made a decision not to ruffle the feathers of those who would be offended by the sight of a mother feeding her child.
I posted at some length on this kerflap which shouldn’t even be an issue Breastfeeding in Public: Covering up for Jesus.
The editor framed her dilemma of whether to publish this image for public view or not thusly:
“While there’s nothing provocative about breastfeeding, it is a provocative image to see on the cover of a fashion magazine, and it’s enabled us to contribute to a necessary conversation around normalizing breastfeeding and why that’s so important.”

She is dealing with the idiocy we see worldwide especially in Xian and Muslim countries where there are enough people brainwashed by absurd religious perspectives that sex and the human body are so dirty that even a partially bared breast seen while feeding a child is offensive, obscene, and must therefore be covered up.

Whether you agree with the editors choice or not to avoid the controversy directly while still trying to change the cultural thinking by publishing the image at all, it is at once a sad commentary that it is an issue in our modern culture at all, yet also a breath of fresh air that so many people worldwide are pushing back on another front against the arrogance and stupidity of religious thought. 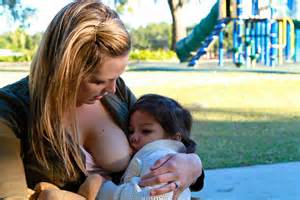 This is not obscene, nor offensive. Seeing this will not damage any child, nor warp any pre-adolescent young man. Google “breastfeeding in public” or search Yahoo Images and you will find page after page of women like the one pictured above feeding their kids out in the open unashamed. The Xians have had enough control and power over of our culture for long enough. We can take it back by constantly holding up the absurdity and repression in their thinking, in ALL religious thinking.
end religion now.

One thought on “Breastfeeding Followup: Ashamed of What?”