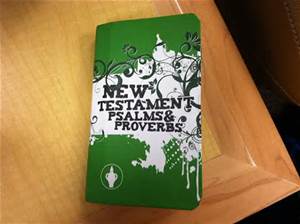 The Gideon mini-New Testament with Psalms and Proverbs. And on the first page it proclaims:
“The Bible contains the mind of God…its histories are true”

It is that time of year again. On college campuses across the country middle aged and old white Protestant Xian looking guys in out-of-date business attire hand out the Gideon mini green Bible to save all us liberal college types, especially those rampantly fornicating students from eternal damnation by saving their souls through the light of Christ.
Guys that look like this: 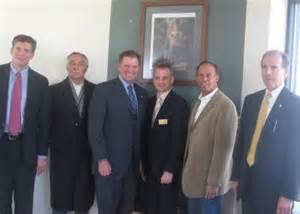 They were on my campus this week. Wherever I’ve seen them, on campuses here up North or down in Kentucky, they all look and dress the same. Put ’em in bag and shake one out, doesn’t matter. One or another comes out and they all look alike.

The Gideons have been around over 100 years, founded right in my backyard about an hour north of me, in Janesville, Wisconsin. They named themselves after an Israelite leader from Judges, one of the most barbaric chapters in the entire ugly Old Testament. The story of Gideon begins:
“The Israelites did evil in the eyes of the Lord, and for seven years he gave them into the hands of the Midianites.”

A few verses later the Lord explains why His chosen ones are being punished by oppressors sent by God Himself:
“I rescued you from the hand of the Egyptians. And I delivered you from the hand of all your oppressors; I drove them out before you and gave you their land. I said to you, ‘I am the Lord your God; do not worship the gods of the Amorites, in whose land you live.’ But you have not listened to me.”

Seems god was pissed again as he is throughout Judges whenever the Israelites stray and worship the other gods besides Yahweh. Dare to worship the competition who have been there all along in the Hebrew mythology: Asherah, Baal and the like, and the Lord God YHWH gets quite irate.

So the Lord sends one of his angels down to choose Gideon to smite the Midianites whom Gideon is rightly concerned wont be easy to defeat, after all God himself sent these bad guys to punish the Israelites for their wicked ways, but:
The Lord answered, “I will be with you, and you will strike down all the Midianites, leaving none alive.”

So now the Midianites who were just doing the Lord’s bidding in punishing the Hebrews for seven long years are gonna get slaughtered at the hand of the same Lord God who loves us all. Isn’t that just special?

If you haven’t noticed the obvious mythic elements in this story what with multiple competing gods, the magic number 7, and the Lords miraculous communications in speaking to Gideon directly or thru an angel…it gets better.
Gideon first has to sacrifice a goat and some unleavened bread which burst into flame at the touch of the angel of the Lord’s staff. No kidding. Then taking a 7 year old bull Gideon tears down the altar to the other gods and sacrifices the bull as a burnt offering to the Lord. Guess a goat and pita bread wasn’t enough.
And it gets even better.

Gideon assembles an army but the Lord repeatedly says there are too many, so 22 THOUSAND men left and 10 THOUSAND remained…. I shit you not. Modern archaeology would probably put huge doubt on those insanely overblown numbers. The total population you would need to have that many men available would number nearly a quarter of a million and estimates for the entire Hebrew peoples in those times are closer to the low tens of thousands. So 32,000 men is just another impossibility, another mythic exaggeration among many.
Even if the translators of the NIV (New International Version) Bible knew that the Hebrew word they translate as “thousands”, may have meant tribe or clan, they leave it in English as an impossible figure, maybe for effect? But that backfires and just adds one more fantastic element to an obviously cooked up story.

So Gideon took the men down to the water. There the Lord told him,
“Separate those who lap the water with their tongues as a dog laps from those who kneel down to drink.” Three hundred of them drank from cupped hands, lapping like dogs. All the rest got down on their knees to drink. The Lord said to Gideon, “With the three hundred men that lapped I will save you and give the Midianites into your hands. Let all the others go home.””

So with only 300 lapdogs, ‘er men left Gideon is about to defeat his oppressors numbering in the thousands?, millions? The Bible doesn’t say exactly but it does clearly state:
“The Midianites, the Amalekites and all the other eastern peoples had settled in the valley, thick as locusts. Their camels could no more be counted than the sand on the seashore.”

Had enough fantasmagorical mythology yet? The Bible reads like a comic book, except when it is ugly, which happens rather often, especially in Judges.
Maybe that’s one reason the Gideons only pass out those New Testaments with just the Psalms and Proverbs inserted from the violent and ridiculously fabricated OT chock full of historical myths. The hotel drawers get the full treatment, but not the college kids: 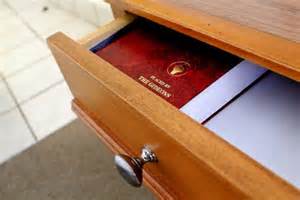 Maybe they’d catch on to what a made-up set of stories the whole OT is full of if they actually read it. Remember, this is a generation grown up on Harry Potter and well versed in violent fantasy stories full of impossible intrigues and conquests like Game of Thrones, Lord of the Rings and the like.

From Merriam-Webster;
Myth- an idea or story that is believed by many people but that is not true, a story that was told in an ancient culture to explain a practice, belief, or natural occurrence.

In case you haven’t had enough yet, Gideon and his 300 rout the bazillion guys with so many camels you cant count them just by blowing trumpets and smashing jars, evidently scaring the beJeezus out of them (I couldn’t resist it) and eventually his miracle 300 pursue and defeat a paltry 15,000 of the enemy who were left just to wind up the afternoon.

Of course after that (and I cant make this funny) two of their leaders were beheaded and the heads delivered to Gideon. 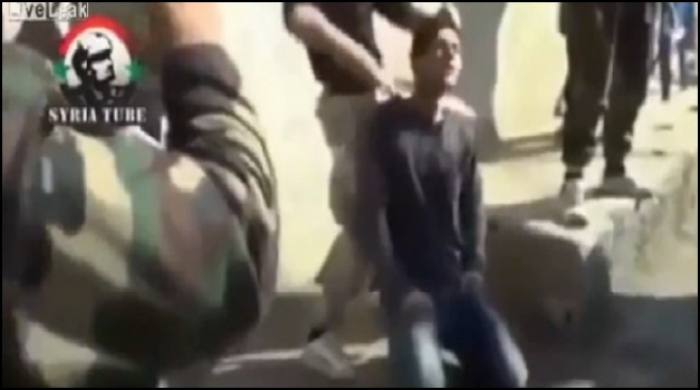 Gideon would be a real role model and hero not only for our concerned good Xian fellas in the bad suits and plaid sport jackets but to the ISIS boyz running amok in the Middle East nowadays, dontcha think?
Yeah, sure I’d be so proud to named after a guy like that. I bet the college kids would really buy into that one too…just like any good Muslim terrorist, at the behest of god, behead your enemies.
How many people that either hand out or receive a Gideon Bible know what a really swell story of imaginary mayhem there is behind it and the utterly fictional nature of this Gideon character and his preposterous exploits.

But the little green books says, the Bible is the “mind of God” and “all its histories are true.”

Old ideas die hard in some circles.
People repeat and respect, even revere this nonsense without ever looking into it. Religious groups are the worst. Like ISIS, Xianity wont let go of its past barbaric fantasies of conquest, most Xians are just more civilized, their religion having undergone a Reformation and it now resides mostly within modern Western liberal civilized democracies where personal freedoms take precedence over absurd, cruel acts of faith. Wanna bet how many of those good ole white boyz even know the barbaric myth of their own namesake?

It has been a truism within the secular community for some time that the best way to become an atheist is to actually read the damn Bible. Hell, Judges alone does it for me. In just three of the 21 chapters of ultra-violence at the behest of the loving Xian god, we have seen enough outlandish historical fiction to refute the little green book’s ridiculous claim for any sort of truth.
And if this is whats on gods mind, we can do without any such god or gods, whether they belong to ancient Hebrews, modern day Xians or Muslim terrorists.